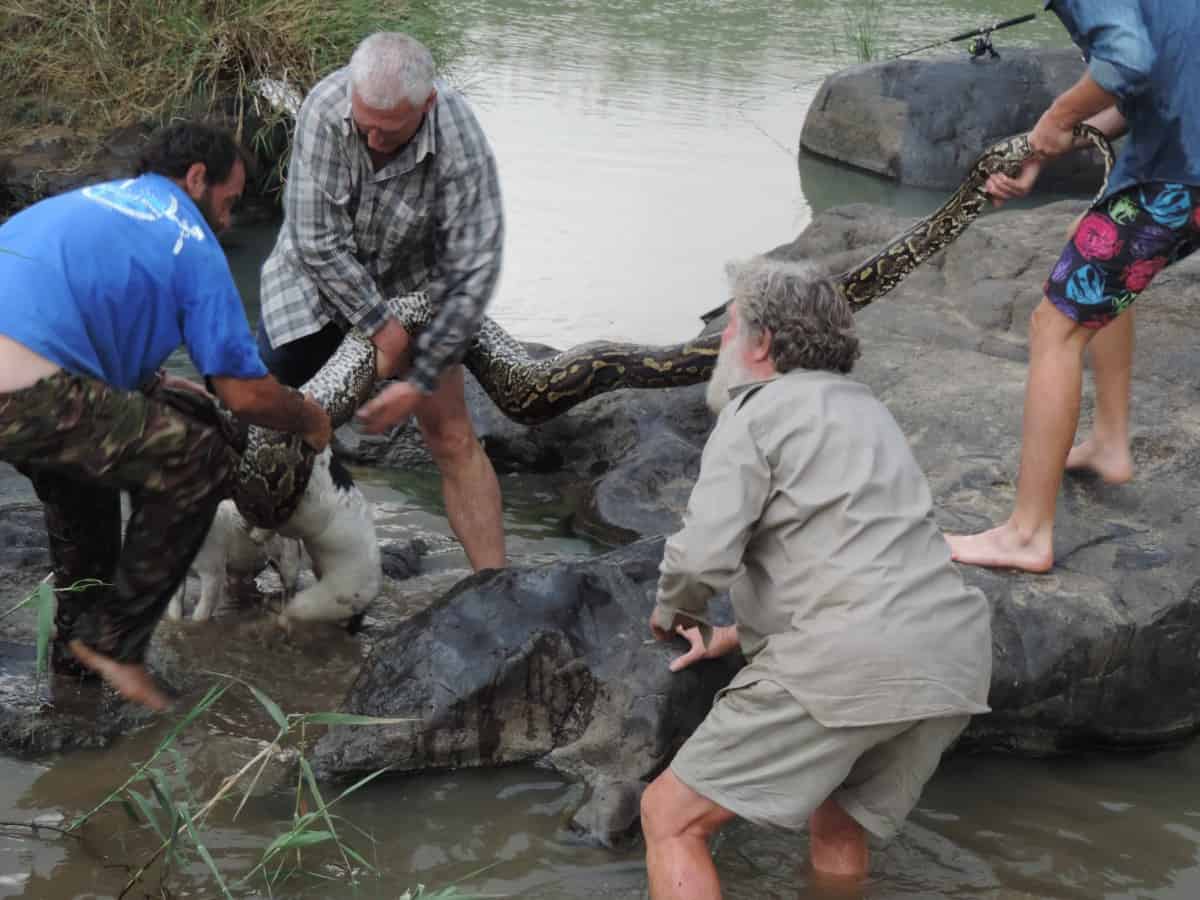 Diesel, the resident Jack Russel is getting on in years and has led an eventful and colourful life as chief tracker and grumpy dog in Zingela River Safari’s main camp on the Tugela River.

A few years ago Diesel alerted fishing guide Yuri Janssen, who was fishing nearby that he needed some help and attention. Anyone who knows how single-mindedly Yuri fishes will know that Diesel had to be more than a little insistent to get Yuri’s attention. Diesel led Yuri directly to an African Rock Python that was busy swallowing a fellow Jack Russell named Noonu. With the help from the dogs and another fisherman, Yuri managed to wrestle the python away from poor Noonu who was by this stage lifeless and somewhat compressed by the big snake. Having separated the dog (and released it unharmed) from the snake, Yuri’s first thought was that Noonu was no longer. However, after detecting a faint pulse, he decided it was time to test out his CPR skills before it was too late. To Yuri’s amazement, his mouth to mouth filled Noonu’s lungs and before long she had regained consciousness and her little tail had begun to wag, albeit very slowly… Little did Diesel know but one day, he too would meet the same fate as Noonu.

A few weeks ago it was Diesel’s turn. Caught by a big python whilst accompanying fisherman on the banks of the Tugela river, though luckily for him, there were four grown men fishing in the area that came to his aid!

After struggling with the snake for 12 minutes they finally managed to prise poor Diesel from the huge snake’s coils and jaws. It was touch and go for Diesel as the python had bitten him on the muzzle, making it even more difficult to breath.

However, within minutes of Diesel managing to get a breath of air, he was up and running around seemingly none the worse for wear. The python was released unharmed and was seen close to the scene of action again yesterday ambushing some bushpig! Seems as though it must have been one very hungry snake!

Zingela is a picturesque tented camp situated on the banks of the Tugela River in the heart of an 8000 hectare conservation area in KwaZulu-Natal.

Whether you are with us for an adventure-filled holiday, conference or team building session, or just to relax in the special beauty of our area, the magic of Zingela assures you of a special and memorable stay. For more info, view their website here: www.zingelasafaris.co.za

Hippo are one of the most dangerous animals in the world and known for being both highly aggressive and unpredictable. Despite being vegetarian, Hippo kill more people in Africa every year...