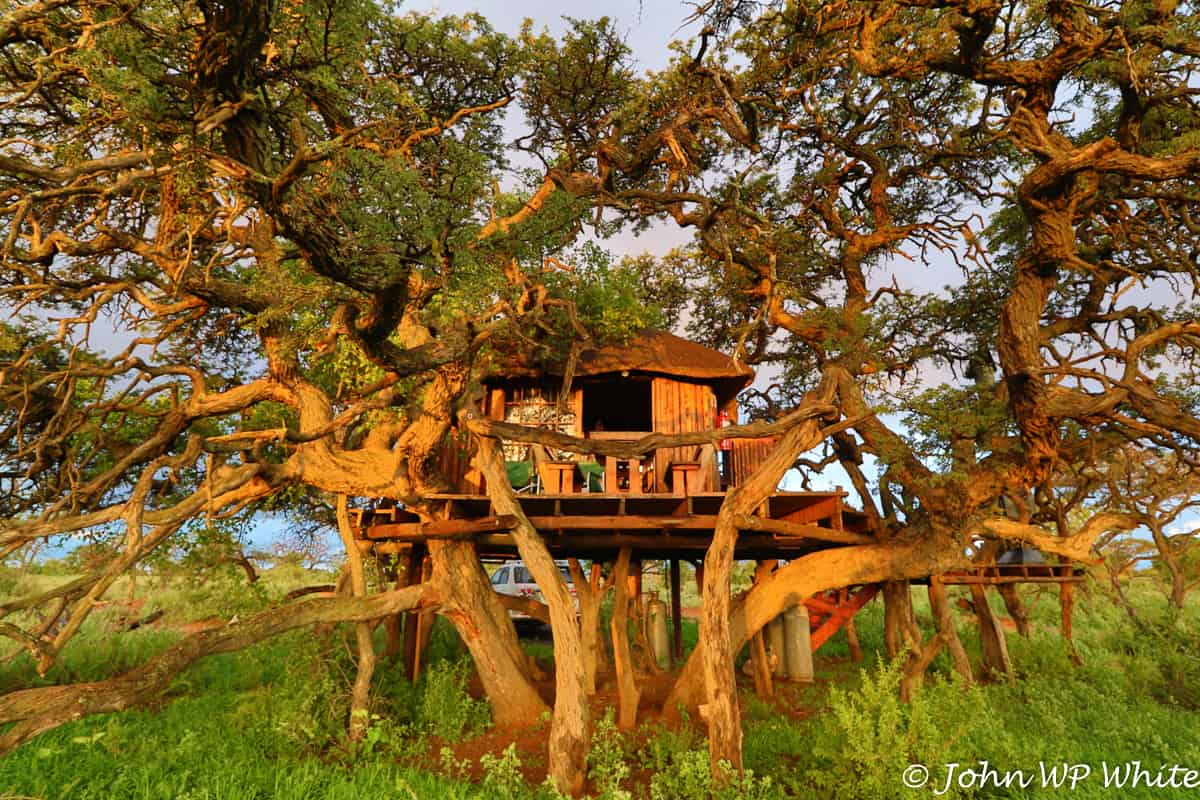 Having a tree house is most children’s greatest dream – mine included – so when we discovered that one of South Africa’s national parks had recently built one, we immediately booked. Tucked away in a quiet corner of the Northern Cape and just an hour’s drive from Kimberley, lies Mokala National Park. It is SANParks newest park, only opening in 2007, and whilst it may not be one of the largest national parks, what it lacks in size it certainly makes up for in scenery…and antelope!

Mokala is home to several threatened species, and while many of these can be seen in other parks, Mokala offers a high concentration of endangered and  ‘recovering population’ species including roan and sable antelope, tsessebe and the endemic black wildebeest.

Nestled in the hills, the landscape at Mokala is varied, from acacia woodland in the south of the park to open grassy plains in the north, which are such a joy for game viewing. Although Mokala has no large predators, the largest is black-backed jackal; game drives still prove to be very fruitful. We had great sightings of Cape buffalo, giraffe, cute warthog piglets and zebra, one of which was closest to the extinct quagga that we have ever seen!

Mokala is currently involved in the Quagga Project which trying to selectively breed the regular plains zebra to create a population as close as possible to the original quagga. Interestingly, the Mokala zebras show reduced striping toward their hindquarters in much the same way as the quagga did, but they have a distinctive ‘pale rump’ appearance instead of the quagga’s brown rear. This has earned them the nickname ‘witgat’ (white-backside) zebra.

The latest addition to Mokala’s accommodation portfolio is the Kameeldoring Treehouse and, like the name suggests, it is perched in amongst the branches of a few camelthorn trees just like something out of a storybook. Completely unfenced and away from the main Mosu Camp in the south and Lillydale in the north-east, the accommodation is basic but has all the essentials.

Inside the wooden and thatched-roofed cabin there is a double bed, small shower room and kitchenette with a gas burner. A large fridge-freezer and braai are outside and, as to be expected, there is no electricity. Its position overlooking Kameeldoring Pan is enviable and for a few moments, as you sit and wait for the animals to come, you can forget that you have to share Africa’s wilderness with any other tourists. Hours can be whiled away on the expansive wooden deck as the constant stream of visitors that we had throughout the afternoon meant there was almost no need to get in your car.

The afternoon saw one of the Northern Cape’s spectacular summer thunderstorms roll in, ensuring that the landscape kept its vibrant green colour. As the heavens opened, it did not take long for the orange roads to turn into rivers. Once the clouds had rolled away we were treated to the most magnificent rainbow before the evening sky was ablaze with colour as the sun set over the waterhole. With the braai going there was nothing left to do but enjoy the night sky.

Yes they can, hyena enjoy bathing in water to cool off and they are also pretty capable swimmers. Hyena have even been seen holding their breath and feeding off a carcass at the bottom of a...