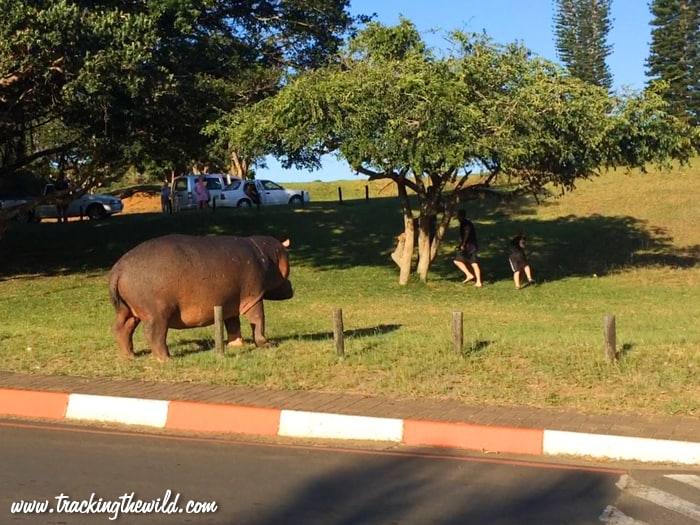 Hippo are one of the most dangerous animals in the world and known for being both highly aggressive and unpredictable. Despite being vegetarian, Hippo kill more people in Africa every year than any other animal. Hippo stand about 1.5m (5ft) at the shoulder, weigh between 1,300kg and 1,800kg and can run at a staggering 30kph (19mph). Unless you have Usain Bolt’s pace (44kph, 28mph), a charging hippo is probably going to catch you! They also have powerful jaws with canine teeth up to 20 inches (50cm) long.

The reason why hippo kill so many people is because they often live in close proximity to people. Couple this with a territorial male hippo and a tendency to run for water, and you can see how people get into trouble.

A trip to iSimangaliso Wetland Park in KwaZulu-Natal, South Africa demonstrated just the sort of relationship some communities have with hippo. The UNESCO world heritage site stretches 280km of coastline from St Lucia in the south to the Mozambique border in the north. The park’s Lake St Lucia is Africa’s largest estuarine system and home to over 800 hippo, the largest population of hippo in South Africa. So we shouldn’t have been too surprised to see a hippo wandering across the road in the middle of town in broad daylight.

After some all-thumbs fumbling we managed to capture the giant water-wallowing mammal ambling across the St Lucia High Street heading straight for the tasty green grass on the other side of the road.  Giving the unsuspecting children playing quite the fright, you can hear their squeals as they make a dash for safety!

Hippo are mostly nocturnal and normally come out of the water at night to feed, and in fact there are hippo-warning signs dotted around the town to warn of these very occurrences. Although this sighting was at 3 o’clock in the afternoon, they are known to leave the water in the early evening and may travel up to 5km (3 miles) from their waterways in search of good grazing.

Location of the sighting in St Lucia

What to do if you come across a hippo?

Although hippos seem like peaceful creatures who bob around in calm waters and nibble peacefully on grass, their dangerous side means they are best given a wide berth.

Most hippo charges are an issue of territory. It is important to put as much distance as possible between the boat and the hippo as their charges in water are normally quite short. The video above demonstrates just how aggressive male hippo are and how quickly they move through the water. Just lucky they were in a power boat and not a canoe! The video was taken on the Chobe River, Botswana, another area known for its large hippo population.

Yes they can, hyena enjoy bathing in water to cool off and they are also pretty capable swimmers. Hyena have even been seen holding their breath and feeding off a carcass at the bottom of a...