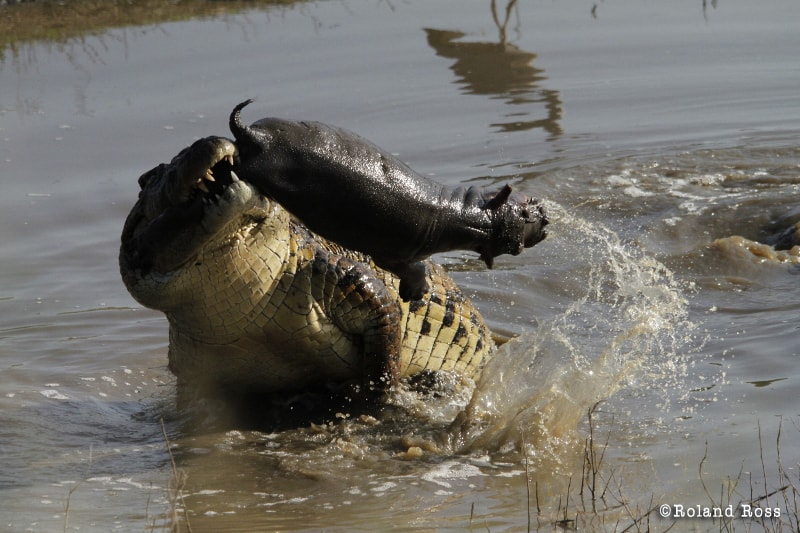 During a trip to Kruger National Park last month my wife and I witnessed the most incredible encounter between a crocodile and a baby hippo.

We were out for an afternoon drive travelling from Skukuza on the H4-1, when we stopped at a small dam approximately 14kms from Lower Sabie. We saw a number of cars with passengers intently looking into the dam, however, we could not get close enough and so decided to reverse out and hope to get a better view from a different angle.

This turned out to be a very good move! Not only could we now see the crocodile in the middle of the dam with the baby hippo in it`s mouth, it was coming in our direction and heading for shallow water right in front of us.

This was definitely the biggest crocodile I have ever seen in Kruger. My estimate of it`s length from nose to tail was at least 6 meters long.

When the crocodile reached the shallow water in front of us it began to play with the baby hippo, in the same way that Orcas (killer whales) play with seals before devouring them.

The photos depict the ferocity the crocodile displayed whilst tossing the baby hippo about. This show went on for about 12 minutes before the crocodile decided it had had enough of its plaything and headed back to deeper water.

As we did not see the beginning of this macabre scene, we have no knowledge of whether the crocodile attacked and killed the baby hippo or if it was already dead.

The poor little hippo showed no signs of life whilst I was filming.

The camera and equipment I used and settings for the shots are as follows: