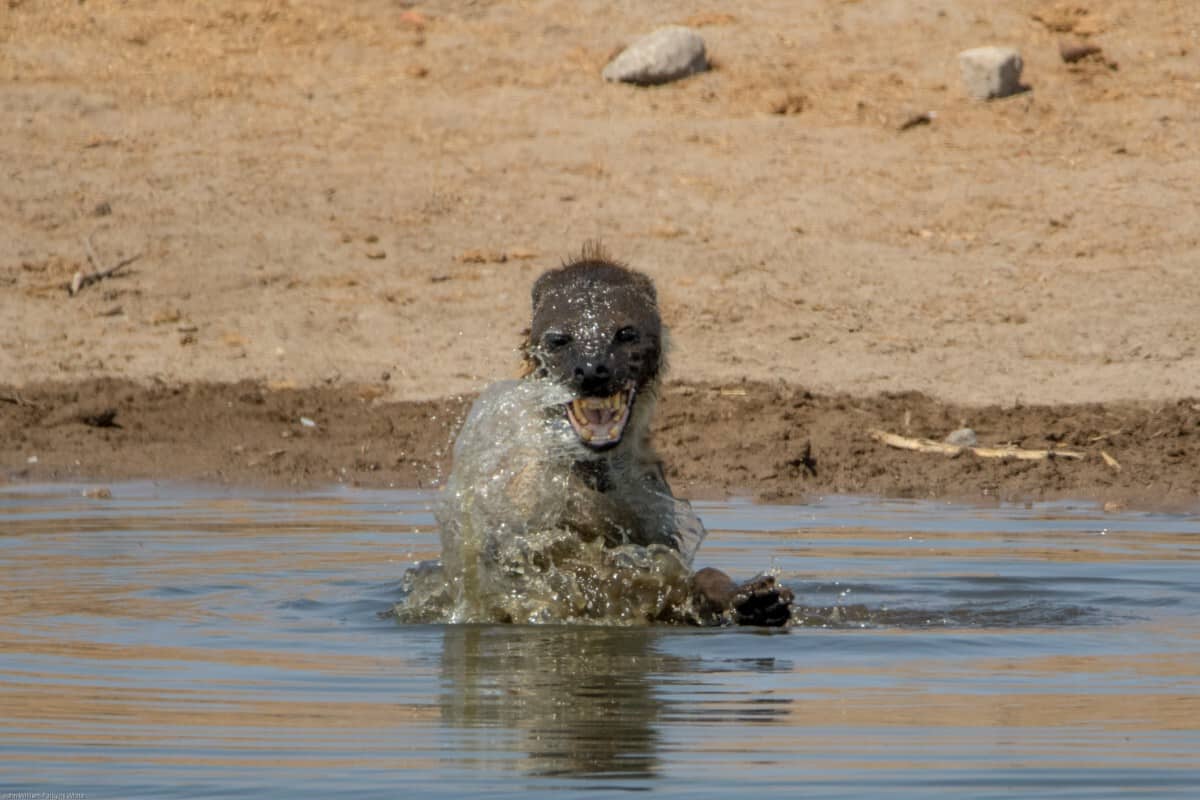 Yes they can, hyena enjoy bathing in water to cool off and they are also pretty capable swimmers. Hyena have even been seen holding their breath and feeding off a carcass at the bottom of a waterhole.

Anja Denker is a Namibian-born wildlife photographer and was fortunate enough to capture a hyena completely submerging itself. Based in Windhoek, Namibia, Anja is lucky enough to have the Etosha National Park on her ‘doorstep’ , just over a 5 and a half hour drive north.  Anja describes herself as a keen observer and tries to capture special and unexpected moments wherever she is. On a trip to Etosha, some unexpected hyena behaviour allowed her to do just that.

At the Chudop waterhole not far from Namutoni Camp in the eastern side of Etosha, she came across a lone hyena swimming around in the middle of the waterhole with only it’s head above water.  “I have seen hyenas sitting in water to cool themselves off before, but never have I seen one this submerged before.” Writes Anja.

Much to her amazement, the hyena then proceeded to dive down headfirst into the water with it’s legs and tail in the air and came up with something in its mouth. Mimicking the style of a coot, Anja came to the conclusion that the hyena was actually fishing, for what else could explain such strange behaviour?!

After studying the photos later that evening, Anja realised that the object the hyena had ‘caught’ was not actually a fish. Instead it was rather slimy looking, almost worm-like with stringy bits hanging off it. Perhaps reeds that were growing at the bottom of the waterhole? Given a hyena’s undisputed carnivorous nature, it seemed unlikely for this one to have turned vegetarian!

At first light the following day, Anja drove back to the same waterhole to see if there was any chance of the hyena making another appearance. Sure enough, it was back in the water fishing for breakfast. This time there was a support crew in the form of more hyenas watching from the sidelines with interest.  After diving into the water the hyena surfaced with a large chunk in it’s mouth and then swam to shore.  “Only then did it dawn on me that there must be a carcass lying at the bottom of the waterhole” realised Anja.

Hyenas are known for their very keen sense of smell and having hunted down the carcass, albeit to the middle of the waterhole, this hyena was determined to feast on it’s findings.

The gathering hyena crew were waiting by anxiously obviously hoping for a share of the spoils. After doing all the hard work swimming and diving for food,  there was little chance this hyena was going to give them a free meal.

The ‘fishing’ hyena however closely guarded her chunk of meat and wolfed it down immediately. After a bit of squabbling amongst them, she regurgitated the meat again and the others were allowed a few pieces. Incidentally this was the only spotted hyena that displayed this extraordinary skilled behaviour – none of the other members of the clan attempted to follow suit.

On a trip to Etosha in 2015, my husband and I were fortunate enough to see a hyena playing in the exact waterhole. We managed to get some great footage of the hyena loosing its marbles!